Three Noles Suit Up For New CFL Season,
As One Heads Upstairs

It's not the glitz and gold of the NFL. But it's football with a good paycheck -- outside on a 110-yard grass field instead of a 50-yard indoor rug. Plus a chance to stay on the NFL's radar.

The 2007 Canadian Football League season is underway with three Noles listed on team rosters. Tay Cody (pictured above) is the best known. Last year in his first full season with Hamilton, Tay led the Ticats with three INTs, had 65 tackles, forced three fumbles and recovered three as well. He was also the team's nominee for the CFL's Most Outstanding Player and Most Outstanding Defensive Player.

One of Tay's teammates is Talman Gardner. The speedy wide receiver bounced back

and forth last season between Hamilton and Kansas City of the Arena League. This year Gardner (pictured left) starts off on the TiCats practice squad after being signed as a free agent in March. 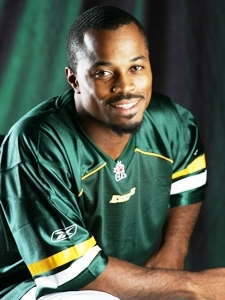 17-year career. But Danny Mac is still part of the league as a color commentator and analyst on league telecasts (he's pictured in the middle on the left)
Check your cable listings for TSN broadcasts of the CFL and tune in to catch Danny´s smooth transition from the field to the press box.