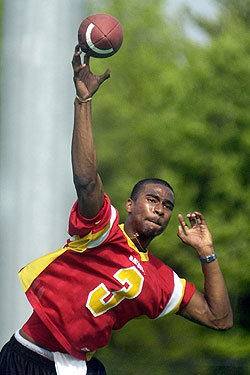 E.J. Manuel has been called a Jamarcus Russell clone. So why wouldn't E.J. Manuel want to play for the coach who molded Russell into a #1 draft pick. Yep, the impact of Jimbo Fisher is paying dividends well into the future, with the commitment of Manuel to the Noles.

Below, you can listen to the big moment when E.J. announced his chosen school, followed by an interview with a Virginia TV station. By the way, you don't need a premimum membership anywhere to watch and listen to E.J.'s press conference. Just  click here for the link. 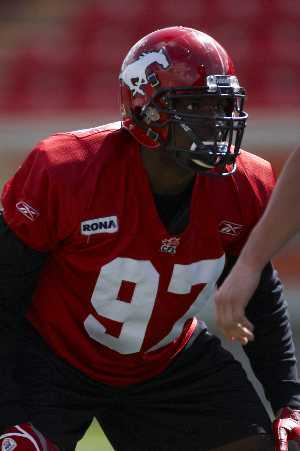 As a Nole he punished QBs. As a pro, Alonzo Jackson looks to be taking the hits.

Drafted in the second round in 2003 by the Steelers, Jackson was apparently never able to make the transition from DE to NFL linebacker. Even after dropping 20 pounds to fit the position.

The Canadian game seemed more suited to his speed and QB chasing chops. But Calgary cut 'Zo (pictured above on the Stampeders practice field) this week after the first of two CFL exhibition games.

Why the quick exit? Kelsey Goldade the Stampeders media contact told us "I don't believe injury played a part. He played well but we have some good competition at that position. I'm not sure if he's talking to any other teams, however I don't believe he has signed anywhere else."

It's a pretty sure bet we'll see Alonzo on a football field again someday. Maybe as a player, perhaps more likely as a coach.
He's a smart young man who loves the game and the Noles. We interviewed him for an upcoming feature on our sister site, Garnet & Great, and he sounds like a guy with real potential for the coaching ranks.

Speaking of coaches. Check out this story on why Steeler coaches look at FSU almost like their own personal farm team. And how Jackson is considered the only recent "bust" in a list of Seminole Steelers including Chris Hope, Bryant McFadden, Willie Reed — not to mention Lawrence Timmons, who looks like a keeper.

Nole Nuggets: Chasing QBs for the Class of 2009

No doubt FSU's new M.O. is to get way ahead of the curve in recruiting. In fact, the Noles have already offered a scholarship to a California kid who just finished his sophomore year in high school. Matt Barkley (pictured left) of football powerhouse Mater Dei also has offers from Southern Cal, Colorado, Cal and Washington... And the Atlanta Journa-Constitution reports FSU is hot after another class of '09 prodigy, Al McCarron of Mobile. Says the AJC: "Coaches such as Nick Saban and Florida State offensive coordinator Jimbo Fisher have beaten a path to McCarron's door, even though he is still a raw commodity"... P.K. Sam didn't catch a pass in the final game of the NFL Europe schedule. But he still finished among the league leaders in receptions (32) and yardage (529 yards), while catching three TDs for the Rhein Fire. P.K. will report to the Dolphins camp in July... Danny Kannell is back in the NFL. Well, sort of. He's working for the league as a color analyst on NFL Network telecasts.

Catch it on ESPN Classic today, Tuesday, June 12 @2pm.
In our book, it's the greatest

comeback victory in FSU history. Certainly the most heart-stopping finish. FSU in it's first year of ACC play was down 21 - 7 at Grant Field early in the fourth quarter. That's when Charlie Ward and company seized the moment. The last ten minutes saw non-stop excitement, including Ward scrambling for a TD, a successful onside kick, and a clutch catch-n-run TD by Kez McCorvey.

It was also FSU's first-ever victory over the Ramblin' Wreck. Since then the Noles have turned the tables, beating Tech 12 in a row.

Will Hell Freeze Over Two Years in a Row?

Anybody predicting Wake Forest would win the ACC in 2006 was quickly rushed off to a nice, quiet state facility where they had no access to sharp objects. At least until the league's championship game when the institutionalized prognosticators and Demon Deacons had the last laugh.

This year nobody is taking Wake lightly. Despite some key players graduating, Coach

Jim Grobe is out to prove the Deacs are no one-trick ponies. Check out the spring practice video* from Fox Sports South for a look inside Wake's program.  You'll get a feel for how Grobe and his assistants are making the school with the second smallest enrollment in Division-1 one of the most respected in all of college football.

*Once on the Fox Sports South main page, scroll down to the video column on the left and click on "Under The Lights: Wake Forest".