« Will Taiwan Easterling Be a Two-Sport Star at FSU? | Main | Is Jost Toast? Is Stroud on the Way? »

P.K. Sam is NFL Europe's Offensive Player of the Week 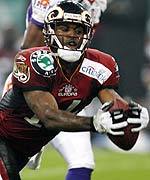 With six catches for 122 yards and a TD, P.K. was on fire last weekend. Fitting for a guy who plays for the Rhein Fire, the NFL Europe team that calls Dusseldorf, Germany home.

After five games in the league's ten-game schedule, P.K. is tops among all receivers in yards per catch with an 18.3 average. He's also fifth overall in receiving yards with 274.

P.K. was allocated to the league by the Dolphins. And if he maintains those torrid stats, chances are good we'll see him in a Miami uni this fall. At least he'll get a chance to make the roster  at the Dolphins training camp that begins a month after the NFL Europe season ends.