Commentary by Bill from Tampa 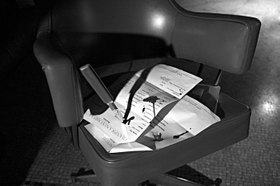 Let me see if I can say this as politely as possible. You, sirs, collectively are a group of idiots.

Complete idiots. Bozos if you will.

Why do I say that?

In case you don’t comprehend what those numbers represent it is the final score of the Louisville/Stanford game in the first round of the NCAA tournament.

And it wasn’t even that close as the Cardinal was down by 33 points at one point. They were never in the game from the start.

No, you thought an 18-12 record, losing four of their last five games, getting bounced in the first round of their conference tournament, a so-so RPI of 65, and strength of schedule of 32 and how injuries were a factor for  their string of losses down the stretch, was worthy of inclusion into your select little group of so-called 34 best at large teams.

So who else could you have put in instead of that team that worships a tree as its mascot? A team with a RPI twenty four spots lower and a SOS of 20 that actually won a game in its conference tournament and had an injury to a key player during its five game losing streak? Perhaps a team with a better record of 20-12? You know, all those factors you claimed were the reasons Stanford deserved an invitation.

After that performance Thursday afternoon, if you people really believe that Stanford belonged while other teams with better credentials did not you are either talking out your you know what or you’re living in Disneyland.

After a second straight year of getting the shaft, who knows what it is that the Seminoles did to you clowns.

So, great job there, guys.  Keep on spinning those facts about Stanford. Just don’t quit your day jobs.