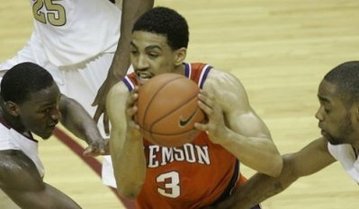 Trailing almost the entire game and by as many as 12 points, Florida State worked its way back to tie Clemson 66-66 with just 6.5 seconds left. That was more than enough time for the 18th ranked Clemson as the Tigers slipped out of Tallahassee with a 68-66 win.

Vernon Hamilton fired a bullet pass to Cliff Hammonds who converted the layup with just three seconds left for the winning basket.

“We could not have executed that play any better,” Clemson coach Oliver Purnell said afterwards.

Obviously not and Leonard Hamilton concurred. Not just that one play but the entire game.

“We were beaten by a team that executed their game plan better than we did," said Hamilton. “They were more patient than we were and did a much better job sticking to their game plan,” he added.

Florida State had a hand itself in aiding the Tigers’ cause. The ‘Noles were bothered all game long by Clemson’s full court pressure and 1-3-1 defense committing 21 turnovers. In the first half alone, FSU gave up 19 points off 11 miscues.

“I was disappointed how we played during various stretches of the game giving up two and three turnovers in a row,” commented Hamilton.

Second chances for the Tigers was an issue as well as FSU was out-rebounded at the half 19-14 with Clemson grabbing 12 offensive boards. Although FSU did much better in that category in the second half holding the Tigers to just one offensive rebound, the first half contributed to Clemson getting thirteen more shots in the game than the Seminoles took.

Prior to Hammonds’ game winning shot FSU overcame a four point deficit in the last minute to tie the game when Toney Douglas’ missed three point attempt was tipped in by Ryan Reid. It was Reid’s only points of the game and it looked like it would send the game into overtime when FSU’s defense forced Clemson to call timeout before the five second call. Unfortunately for FSU fans it allowed Purnell to set the play.

“I’m proud how we fought back which is a compliment to our raw talent,” said FSU’s head coach. “But we just didn’t make good decisions tonight. Clemson’s defense had something to do with that. We were beaten by a team that made the last shot and did the little things to win the game.”

Leading the way for FSU was Al Thornton with 19 points on 7-14 shooting along with 6 rebounds. He was joined in double figures by Isaiah Swann with 13 points and 5 assists and Jason Rich with 12 including 7-8 from the free throw line.

What kept FSU in the game despite only taking 50 shots was 16-29 from the charity stripe.

FSU played from behind most of the game always playing catch up. Each time Clemson answered.

The Seminoles trailed 31-27 at the 4:50 mark when Swann’s lob over the point forward Sam Perry was picked off and Hamilton connecting on a three in transition. After Casaan Breeden’s layup, Hamilton converted a 15 foot jumper. Perry again stole the ball this time from Ralph Mims and finished the play himself. The run was finished off by Rivers three pointer from the left wing after FSU had passed the ball out of bounds.

With Clemson now leading 41-29, the Tigers looked to increase the lead when Uche Echefu’s lazy pass was picked off. However Clemson missed the easy layup that provided a game changing spark for the ‘Noles.

FSU’s defense forced two turnovers in the final minute of the half and Rich and Douglas each had layups with Echefu getting the traditional three point play.

The ‘Noles continued their momentum in the opening minutes of the second half. Swann’s three ball from the deep right corner brought FSU to within one, 43-42.

Turnovers caused by Clemson’s trapping defense plagued FSU again and Perry’s layup off a poor pass by Rich gave the Tigers a 51-43 margin.

Again FSU worked its way back. Rich stole the ball and Thornton finished off the play with a layup tying the score at 56 with 5:42 remaining.

After Clemson grabbed the lead back, 61-56, FSU continued to attack the basket drawing fouls. Rich followed a three pointer with two free throws. Douglas made one of two from the line to give FSU a 62-61 lead with 2:20 left.

Seconds later Hammonds took the lead back with a three ball. Thornton missed a contested layup that could have tied the game. Mays, who could have been fouled earlier in the possession, offensive put back gave Clemson a 66-62 lead.

With Clemson being a poor free throw shooting team Hammonds was quickly fouled. The strategy paid off as he missed the first free throw. The rebound was corralled by Reid leading to his game tying shot.

With the loss Florida State falls to 12-3 and will attempt to pick up its first conference win Sunday night. That task will not be any easier as the ‘Noles travel to Chapel Hill to take on the 2nd ranked Tar Heels. Tip off is at 7:00 PM.