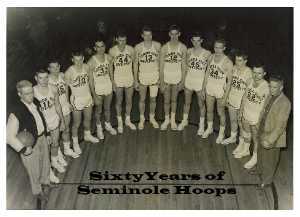 A stubborn Coastal Carolina team would not go away. But Florida State managed to make enough plays to hold off the feisty Chanticleers Thursday night to win by the score of 78-65.

Even though the outcome was in favor of the Seminoles, Coach Leonard Hamilton couldn’t say he was all that pleased with his team’s performance. “We needed a little humility” the head coach said after the game obviously referring to the closeness of the game and final score.

Hamilton acknowledged his team did not bring it for all forty minutes and was disappointed with the second period performance. Giving a back-handed criticism to his team Hamilton said “They (Coastal Carolina) simply executed better than we did in the second half."

Fortunately FSU was the more athletic team overall and found ways to get to the free throw line. The ‘Noles went to the line 21 times connecting on 16 while Coastal was just 4-7 from the charity stripe.

Florida State nearly went the first half without committing a foul but picked up two late in the half.

FSU struggled in the second half to make baskets. For more than four minute stretch after the ‘Noles built an 18 point lead good looking shots would go in and out of the cylinder.

Again fortunately for FSU Al Thornton, Toney Douglas, and Jason Rich struggled very little. Thornton scored 21 points on 6-8 from the floor with 8 of 10 free throws. Douglas was 8 of 12 for 17 points and Rich 50% adding 15.

The Achilles heel for FSU however was three point shooting. With Coastal Carolina employing a 2/3 zone and often a 1-3-1 that really caused problems, the ‘Noles could not break the zone converting just 4 of 18 three balls.

Meanwhile it was Coastal’s perimeter shooting (9-22) that kept them in the game. Joshua Mack’s three pointer from NBA range pulled the Chanticleers to within six, 69-63, with only 3:35 left.

FSU started off the game well enough. On the strength of dribble penetration and several mid-range jumpers the ‘Noles were able to get out to a 25-13 lead at the 8:40 mark.

The highlight play during that period was Ralph Mims drive into the lane dishing off to a cutting Isaiah Swann along the left baseline to give FSU an 18-9 lead.

But three straight baskets in transition by Carolina closed the gap just one minute later. Moses Sonko’s rebound and coast to coast made the score 27-20.

Defensively Hamilton could not have been pleased as Carolina was shooting 53% at that point.

The Seminoles stretched out the lead to 39-28 with Thornton the main contributor scoring six points most of which were at the free throw line. Mack canned a three to bring it back to an eight point margin. But Ryan Reid answered with a put back and Douglas nailed a 12 foot jumper with four seconds left to give FSU a 43-31 halftime lead.

After the intermission FSU seemed temporarily confused by the 1-3-1 look Carolina came out with. Steven Sexton’s three in transition from the right corner made it 45-36.

But FSU rattled off nine straight points starting with Thornton’s three from the right wing and ending with the play of the game when Ralph Mims stole the ball dribbled down the court and lobbed an alley-oop to Thornton for the slam dunk.

With the score 54-36 and 16:02 to play, FSU looked to have finally gotten control of the game for good. However that seemed to a turning point for the better for Carolina.

FSU could not buy a basket. For almost six minutes all the ‘Noles could muster offensively was a single free throw. Jack Leasure scored two three pointers the second of which had Jerel Allen chasing him back and forth along the baseline until Leasure finally worked himself open in the right corner.

The Chanticleers had closed the score to 55-48 and despite Hamilton calling a couple of timeouts he could not seem to get his team back on track.

Using his next to last timeout of the game however Hamilton employed a strategy of going small. The guard heavy lineup went on an 8-0 run to give FSU a 63-48 lead at the 8:02 mark.

Even after Thornton stole the inbound pass from Joseph Harris taking it the distance for the slam and a 67-53 lead Coastal would still not go away easily. Leasure scored five quick points on a set shot three pointer and a breakaway layup off a FSU turnover.

The Seminoles helped again when Douglas was called for a 5 second violation trying to inbound he ball. Shortly after that Mack hit his NBA range three to make it 69-63 with plenty of time remaining.

Hamilton called his last timeout to set the strategy. That was obviously take care of the ball and play tough defense.

FSU didn’t commit another turnover while Douglas canned an 18 foot jump shot and added a layup off a steal seconds later. Thornton added a block of Sonko’s attempted layup and Swann, driving the ball in, found Mims in the right corner for a wide open three with 1:10 left to seal the game.

Carolina could only score one more basket to make the final margin 78-65.

The Seminole defense locked down when it counted in holding Coastal to just 46% for the game while the offense connected on 51% despite the 22% from behind the arc.

Credit goes to Florida State in not stumbling against a team good enough to get the upset. The Tribe will have to execute a little better though as the tougher part of the schedule approaches.

Florida State’s last game before the Christmas break is Saturday against St Peter’s at the Civic Center. Tip off is at noon.