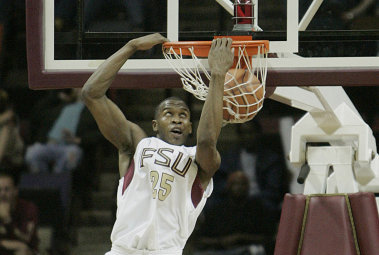 If the Southeast Louisiana Lions had any thoughts of upsetting Florida State after getting an early 7-3 lead, they were quickly erased as the Seminoles used a 26-6 run in less than ten minutes to take complete control of the game easily winning easily by a 88-62 score.

FSU used a balanced scoring attack that saw the margin approach thirty points in the first half. Five players finished in double figures and ten of eleven players put points on the scoreboard.

Able to post up on the blocks all game long Jason Rich led all scorers with 16 points and Casaan Breeden had a career high with 13. Two early three point shots propelled Isaiah Swann to 12 with Al Thornton and Toney Douglas each adding 10.

While the offense reached a new high for points this season, Leonard Hamilton was more complimentary of his defense. With the Lions, Hamilton indicated they were more of a one on one type shooting team. With the challenge to the defense of staying in front of  their man, Hamilton felt his team accomplished that mission very well.

Knocked at times for his defense, Hamilton acknowledged that Swann even after the Lions’ leading scorer Daryl Cohen (19.2 ppg) nailed a three pointer on his very first shot over the junior guard. Swann held him in check shutting him down with no other baskets for the rest of the game. Cohen finished with just 7 points.

“We felt like they were a good three point shooting team and we made that a priority” Hamilton said.

With the Lions connecting on just 3 of 19 three balls obviously the ‘Noles accomplished that priority.

SE La was held to 38% shooting for the game.

The game was a repeat of the last three games where FSU used an effective ball hawking man to man defense to force SE La into 21 turnovers allowing the Seminoles the opportunity to push the ball up the floor on numerous breakaways.

At times it seemed all too easy for FSU on the breaks as the ‘Noles hot-dogged it at times with between the legs and behind the back passes.

Not all of them were without comedic errors. Jerel Allen’s fake behind the back dribble to a behind the back pass to Ryan Reid saw the freshman forward lose the ball high into the air. Fortunately Breeden was there to grab it and convert the basket.

The largest lead of the first half at 51-22 occurred with 2:04 left. Thornton grabbed a rebound; put the ball on the floor and dribbled the length of the floor for the layup plus the foul.

Two free throws by Douglas made the halftime score 55-30.

With a large lead at halftime the problem is always keeping the same focus for the second twenty. FSU had its difficulties in that area committing three turnovers on its first three possessions.

Hamilton did not hesitate to say he was “disappointed” by the turnovers. For the game FSU committed 19 miscues. Hamilton labeled them as the “unnecessary type”.

Rebounding was also an issue. “Rebounding continues to be a concern for us” stated Hamilton. “They had inside position and we gave up too many offensive rebounds (13) in this game.”

Despite those issues for Hamilton, FSU was never threatened and led 86-54 on an easy layup by Breeden off a nice feed from Swann who faked the shot but spotted Breeden heading to the rim. The basket brought in the walk-ons Matt Zitani and Brian Hoff with 2:33 remaining.

For the game, FSU shot well again connecting on 55% from the floor. Assistant coach Andy Enfield continues to make his contributions known as the ‘Noles once again were excellent from the stripe converting 18 of 21 charity shots.

Notes: FSU will take the next week off for final exams and will
not be back in action until December 18th against High Point. …. Swann suffered a bone bruise on his left wrist when Douglas lobbed a three quarters court pass over Swann’s head. He tumbled out of bounds falling hard on his already injured left hand. Swann did re-enter the game apparently no worse for the wear. …. The virus that plagued the team in the game versus Georgia State continues to be a problem this time hitting the coaching staff. Tim Carter remained at home for the game suffering the effects of the virus. Hamilton expressed hope that he could avoid catching it. He would be one of the few who would as eight players did not make practice of breakfast the day of the game in Atlanta last Thursday.