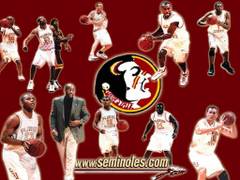 Coming off a week of final exams and little practice it was expected that Florida State’s offense might be a little out of sync. That wasn’t exactly the case as the ‘Noles’ defense in the first half left much to be desired against the visiting High Point Panthers.

That changed dramatically in the second half with FSU’s defense clamping down leading to a 30-5 run over twelve minutes of the period. The Panthers at one point went 8:04 without scoring a point.

The margin did not reflect how much FSU dominated in the second half. The Panthers, a good shooting team, basically matched the Seminoles shot for shot shooting 50% over the first half and trailed by two just points only because Thornton canned his third straight three pointer right before the buzzer to take back the lead for FSU.

“In the first half we did not have as much energy as we should have,” said Leonard Hamilton. “We just were not in a defensive rhythm.”

In the second half though FSU used its defense to create offense with numerous steals and blocked shots in holding the Panthers to just 41% for the game.

It helped that the ‘Noles did a better job at controlling the boards. Down by three in that statistic, FSU grabbed four more boards in the second period to finish 38-37.

In that category Uche Echefu provided the impetus pulling down 12 boards with 5 offensive rebounds. “We need to have him rebound more and tonight he stepped up," Hamilton added.

Thornton joined the 1,000 point club moving in to 38th place on the all-time scoring list. Fittingly his 1,001 point came on the three ball right before his buzzer beater in the first half.

Shooting 0-9 from behind the arc in his previous three games, the senior forward was 3-5 for the game. Said Hamilton, “Al works as hard as anyone else at three point shooting.”

Also joining Thornton and Echefu in double figures was Toney Douglas and Jason Rich with 15 and 10 points respectively.

Every time the ‘Noles eked out a lead, the Panthers would work their way back to trail by just one or two points. Twice in the first half FSU stretched out to a nine point lead but sloppy play allowed High Point to close the gap and stay close.

“We knew this team was a little better than most people knew”, commented FSU’s head coach.

Panther coach Wally Lundy would not allow FSU to go on extended runs calling timeouts to stem the momentum. The strategy paid off in the first half.

Jerald Minnis, cousin of former FSU wide receiver Snoop Minnis, hit a basket with thirteen seconds left in the half to give High Point its second and last lead of the game, 41-40.

Increased intensity by the defense gave FSU several opportunities for quick baskets. Seconds after his offensive put back, Echefu’s blocked shot gave Isaiah Swann an easy transition layup. Douglas finished off a steal with another layup.

Thornton forced another turnover by High Point and was fouled on the play. It proved to be the turning point in the game. After Thornton made the first free throw, Lundy was called for a technical foul. Thornton calmly sank all four attempts that gave FSU a 55-44 lead at the 16:05 mark.

High Point would score just one basket over the next eight minutes as an aggressive man to man Seminole defense produced several more steals by Thornton, Swann, and Jerel Allen and fast break baskets.

After another transition layup by Allen and an offensive putback by Echefu, FSU lead 73-46 with less than eight minutes to play.

High Point cut into the margin in the last couple of minutes as FSU cleared the bench. Along with Matt Zitani and Brian Hoff, Josue Soto saw his first playing time of the season logging four minutes.

Soto was thought to be redshirting this season. While Hamilton did not address the issue in the radio post game show he did say that “while not totally ready, we saw an opportunity for some minutes and to get him some confidence”. Calling him a “smart, heady player” Hamilton wanted have Soto gain some experience as the ACC portion of the schedule approached just in case.

For the game FSU shot 49% from the floor and continued its league leading shooting at the line connecting on 74%. FSU was 7-22 from behind the arc.

Also of note was the 9 blocked shots.

That did not seem to impress the coach however calling them a “surprise”. “Hopefully we don’t have to rely on that and instead
reinforce our defensive principles to prevent the ball from getting inside.”