« Noles Cruise, Tune-Up For Gators | Main | What Was Urban Thinking? » 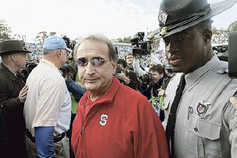 Chest pains too much for N.C. State? A Wolfpack fan site is reporting a wildfire rumor sweeping the campus that Amato is about to be whacked. Calls to North Carolina media confirm that it's only a rumor.  However, Carlton Tudor of the Raleigh News-Observer wrote what amounts to a death sentence for Chuck:

"…this situation isn’t all that complicated. Amato, today, is where Bunting was after UNC dropped successive games to South Florida (37-20) and Virginia (23-0) in mid-October. He was fired three days later. It’s right that Amato should be in this trouble, too."

Meantime, 850 the Buzz in Raleigh suggests Amato may survive:

"At the very least, next season will be similar to what John Bunting went through this past season with every game becoming a referendum on job status."

Jimbo Fisher may be too rich for FSU's blood. Tony Barnhart of the Atlanta Journal-Contitution revealed some interesting facts about the salary structure of FSU's assistants:

Spurrier to Miami? Not so fast, my friend. Omar Kelly, the All-Canes-all-the-time writer at the Sun-Sentinel, says The Visor-ed One's move to Coral Gables may be more smokescreen than smoking hot news:

"I do know one things for a fact: The search hasn't begun. Research is probably being gathered, but the search hasn't begun. Dee is not a liar, and he said it hasn't begun and I believe him. Now, with his job security in question as well I'm not exactly sure he's the best authority (Donna Shalala is), but who better to talk to Spurrier than his frat brother."