« Little Things Add Up To Big Frustration | Main | With a winning attitude like this, UCLA might actually knock the Trojans off their high horse » 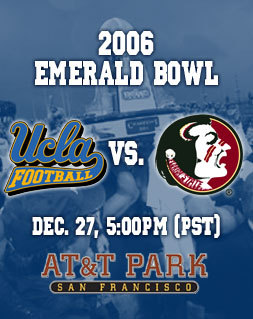 ChantRant: Will FSU fans find hotel rooms in the Bay Area during the holidays?
Cavalli: "One of the reasons this bowl was created in the first place was to provide the city and hospitality industry in the city with an anchor event between Christmas and New Years, which had traditionally been a very slow time here. So we have a number of preferred hotels which participate in the bowl game and provide attractive rates and packages that include tickets to the game. They can all be accessed on our web site.

"If you want an entire package including airfare, click on the Champion Sports Tours logo on our website and they'll be thrilled to put a total package together for you."

ChantRant: Can you get to the stadium (AT&T Park) and around town without a car?
Cavalli: "Yes, this stadium is a marvel when it comes to mass transit. There's all kinds of BART (Bay Area Rapid Transit) access and train access. So you don't have to drive to the game. That info is on the website, along with a whole section on visiting San Francisco."

ChantRant: How about bowl-related activities for the team
and fans?
Cavalli: "Most of our events are geared for the teams and official parties. We take them on a tour of Alcatraz, and they have a video game competition. But a couple are open to fans. There's a rally on Union Square the day before the game — at 11 am on the 26th. After that is a welcome lunch for the teams at the historic St. Francis Hotel. That has limited space, unfortunately, as the teams and official parties take up most of the spots. But if people who are interested jump on it quickly, they may be able to obtain a ticket for the lunch.

"Of course, there's so much for FSU fans to do in San Francisco. You've got the Bridge, cable cars, Fisherman's Wharf, Alcatraz, Union Square, North Beach, Chinatown, as well as some of the greatest dining in the world."

ChantRant: What can we expect for the weather?
Cavalli:  "Temperatures are typically about 55 degrees, so you'd bring a sweater or jacket. And we have had rain, so it might be good to pack a small umbrella."

ChantRant: Where will the teams practice before the game?
Cavalli: "The Florida State team will be practicing at Laney College, in the East Bay about 20 minutes from their hotel. UCLA will be practicing at the City College of San Francisco. Both are junior colleges with new field turf fields."

ChantRant: Why did the bowl committee pick a team with
a 6 - 6 record?
Cavalli: "When we made the arrangement with the Pac 10 and ACC, I honestly never thought we'd have a chance at Florida State or Miami. And here in the first year we actually had the chance to choose between the two schools. Nobody's going to get hung up on the fact they didn't have a great season. They may have been down a little bit, but they're still one of the great programs in the country with the winningest coach of all time. So we consider it an honor to have Bobby Bowden and the Seminoles here.

"And we've already been getting stories around the country that the Emerald Bowl has the best matchup outside the BCS, so we're pretty excited about it."